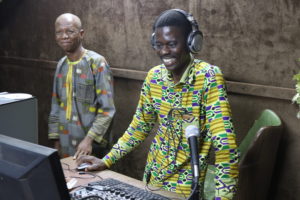 In recent weeks and months, many around the world have been stricken with fear – fear that has driven some to despair, searching for hope. Pierre, the leader of Radio Évangile Développement (R.E.D.) in the city of Bobo, Burkina Faso, was struck by how hope found its way into the most despairing hearts. He shared, “Since I was young, I wanted to serve God. In 1998 I had a dream and saw a microphone with lights and didn’t understand what it was. But as I grew older, I saw it as a sign of God’s will for me to be here.” After Pierre finished studying at the university, he went to R.E.D.’s radio station in Bobo.

Pierre continued, “It is almost 10 years that I am working here, and I have been touched by two stories.” A pastor was preaching on the radio when, in a village nearby, a listener was about to hang himself. He was tying a rope to a tree when he heard, “You who want to kill yourself shouldn’t do that.” The man stopped, looked around, and didn’t see anybody, just the radio. So, he decided to go to the radio station and talk to the pastor. He explained to him what he had planned to do. The pastor prayed for him, shared God’s Word and led him to Christ.

This same pastor was preaching to the same village when someone was about to kill their wife. He too heard the preaching on the radio and decided instead to go talk to the pastor. This man also gave his life to Jesus. Pierre has seen how the power of God’s Word transforms lives in the villages of Burkina Faso. God’s Word proved to be a turning point in the lives of those who were void of hope. His Word can still do that today.